I’m increasingly in love with fun foam sheets for a bit of quick crafting; I’ve seen some amazing stuff done with it (I do NOT do amazing stuff!) over on Pinterest, but what I do love is that is is very versatile. It works brilliantly for something rough and ready and which needs to be weather proof and then there are terrible clever people who do remarkable things like some of the crafts I’ve piunned on my Kid Craft pin board below.

I rattled this up as part of my Bostik Blogger challenge because I wanted to see how their Blu Stick works on foam sheets; it’s an ordinary glue stick which is blue on application and turns clear as it dries. It doesn’t stipulate that it can dry clear on foam, but I’m pleased to say it does. The beads are a Craft Planet mix of wooden beads, sewn on with acrylic yarn. 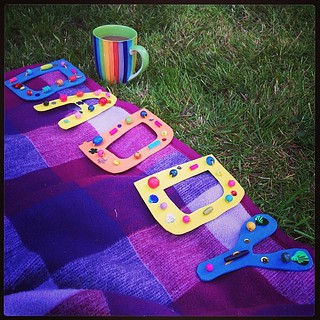 The proper sensible thing to do would be to print out large size type in the letters you need and cut out neatly; since I was crafting in the garden, I drew free hand and then stitched on the beads. You can use a fairly blunt cross stitch needle for foam, which makes it safer for small people. I think we’ll hang these up for Father’s Day – I’m sure he will appreciate it 😉

Disclosure: I blog at Patch of Puddles where we are a Bostik Blogger and get products for free to produce crafts. We supply the craft kit to the bloggers from CraftMerrily, our online craft shop. Amazon link is an affiliate link.

Last year we had fun making these little beaded elves from pipe cleaners and wooden beads. With some creativity, bits of fabric and ribbon we ended up making lots of fairies too and strayed into Fimo heads and faces too; the possibilities are pretty endless.

First of all we bought some assorted wooden beads on ebay and some proper pipe-cleaners from a real tobacconist (not chenille craft stems, they are too thick). Next we made the body shapes out of two pipe-cleansers.

Make two shapes like this, one more twisted than the other and slot the less twisted one on top of the main body. It makes arms which you tighten around the neck. Then add a large bead body, leg and arm beads and a head on top of the whole thing. You can buy wooden face beads, or draw on plain ones with Sharpies. Fold back the pipe-cleaner to make hands and feet and hold on the beads. Accessorize with gauze, silk petals etc. We made pointy Fimo hats, with a hole pressed through the top for a hanging loop, and stuck them on top.

This craft first featured on our family blog.

A really quick and easy make last year was these  bead and button decorations made with memory wire, beads, buttons, bells, ribbons and yarn. eBay proved a good source of all of these bits and bobs, though they have inspired me to maybe add some of those things to our own shop next year.

I got the original idea from Pinterest (of course) which was an early addition to my Christmas Crafts board, which has been really popular all year.

After that we branched out and used beads too, which added some glittery sparkle.

The tricky bit was securing the top of these. Proper clear sellotape (or wire to twist if you have that knack of that) and some softer ribbon would have worked better. They looked really beautiful on our light tree though and were a great way to use up spare beads and buttons. A few of them ended up with tiny bells strung on the ends, which made it all very festive.

This craft originally featured on Patch of Puddles where you can see higher resolution photos of all of them.

Over the summer we had a lot of fun with some felt pieces cut into the shape of butterflies, exploring different shapes, patterns and so on. One theme that came up a lot was symmetry, a concept my eldest has a disproportionate amount of difficulty with and which was new to my youngest girl. By cutting out butterfly shapes and using the idea of cutting on a fold to get matching sides, we covered quite a lot of educational concepts. Then we cut out pairs of pieces of felt to decorate them and used buttons to embellish our efforts. It culminated in a summer butterfly picture but much fun was had along the way.

Here are just a few of what we designed. Although it was a simple activity it was a great deal of fun and the designs got more complex as the activity went on. We had intended to sew edges and embellishments to them and hang them as a mobile. It didn’t happen this year but I think we will do it, probably with a few other insects too.

Anyway, the purpose of this rather tardy post is to include the download of printable butterfly shapes I made. Each is a ‘half’ butterfly so you can cut them out on paper or fabric and work on symmetry yourself! 😉

A couple of years ago, I started collecting button pictures on Pinterest. Something about them appealed to me after giving a tray of them to my littlest girl to entertain herself one day. Initially there were very few pictures on there but then suddenly a raft of them began to appear and before I knew it, I had a proper Pinterest board full of button creations! But it was once I saw my lovely friend June making some of her amazing jewellery using buttons that I knew I had been on trend ahead of time 😉

We’ve had a good go at making pictures from buttons but I thought I would try a bracelet, just to see how possible it was for someone not terribly skilled in complicated things. I gathered together a palette of colours first, planned out some combinations in order so it had my requirements for ‘organised random’ and then threaded them on to clear elastic, starting at the middle. Each pair of buttons is held together by the threaded elastic which goes through the holes from back to front and back again, going through the 4 holes to form a cross.

My handy hints are:-

Start in the middle and try to pick buttons with 4 holes. By threading in a ‘cross’ through them, both top and bottom buttons, they’ll stay secure and won’t slip.

For this jumbled look, pull the elastic fairly tight so there aren’t spaces between the button stacks.

I always finish a bracelet on elastic with crimps, even if its just a quick child’s bracelet. It’s so much better than having a pile of beads or buttons on the floor after an hour of zealous stretching 🙂

So having made my quick and simple version, I sent a picture of it to lovely June from Goddess Jewels and asked her if I could showcase her talent. And blow me if she didn’t respond with a beautiful version of it, done properly! June has used wire to give this a more organised look and she is going to do me a tutorial next week to put here. How fantastic is that?

It’s a great opportunity to show you some of her work, which I am frequently in awe of as I just do not have the patience for the fiddle nature of wire and beads.

I just think this tropical button bracelet is so beautiful. (So beautiful I bought it actually!)

And I love this button necklace too, an incredibly elegant piece of jewellery.

I’ve known June a very long time and many of my friends have now bought bracelets from her. She has a real knack for putting together combinations that work beautifully and the bracelets are a work of art and feel incredibly nice to hold and wear. I can’t wait for mine to arrive as the ones I’ve seen are just so tactile and gorgeous. Do take a look at her shop, I think you’ll be hooked.

A year or so ago, I sat my then 6 year old with a tray full of buttons and left her to play. To my surprise, she was still there, hours later, making pictures as happily as Larry 🙂 (Who is this Larry, I ask myself?)

I liked all her efforts so much that I started a Pinterest board to collect other ideas and since then, buttons seem to have just taken off as the latest craft fad. END_OF_DOCUMENT_TOKEN_TO_BE_REPLACED

This website uses cookies to improve your experience while you navigate through the website. Out of these, the cookies that are categorized as necessary are stored on your browser as they are essential for the working of basic functionalities of the website. We also use third-party cookies that help us analyze and understand how you use this website. These cookies will be stored in your browser only with your consent. You also have the option to opt-out of these cookies. But opting out of some of these cookies may affect your browsing experience.
Necessary Always Enabled
Necessary cookies are absolutely essential for the website to function properly. This category only includes cookies that ensures basic functionalities and security features of the website. These cookies do not store any personal information.
Non-necessary
Any cookies that may not be particularly necessary for the website to function and is used specifically to collect user personal data via analytics, ads, other embedded contents are termed as non-necessary cookies. It is mandatory to procure user consent prior to running these cookies on your website.
SAVE & ACCEPT